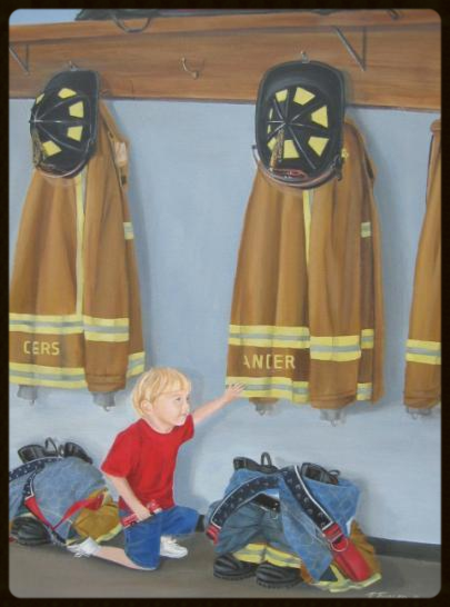 
The story behind my inspiration to honor the Fire Service:

After Margate Fire Rescue came to my aid in April of 2004, I was truly inspired. I have always had a great respect for all first responders, but until I was actually on the receiving end, that I was truly touched by their help and demeanor. The irony of the exact date I was rescued, was exactly two years to the date that my beloved brother passed at the tender age of 46.
The 911 call that was placed for me was a medical emergency. I had an allergic reaction to a medication prescribed, severely affecting my breathing. The sound of the sirens coming from the distance, was the sweetest sound I had ever heard. The paramedics arrived within  minutes from the initial 911 call.
Several weeks upon being released from the Hospital, I stopped by Station 18 to find and thank my Rescuers.  I knocked on the door and Paramedic/Firefighters John Gener and Danny Rodriquez both answered the door, I said to them, "There's my Heroes!" The puzzled looks on their faces I still recall. I explained to them why I had stopped by, to thank them personally. I came to find out that they work one day on, then
two days off. Really was amazing that they BOTH answered the door when I had stopped by, not knowing their schedules!
What truly forged my inspiration was when I said to John Gener, "you must receive tons of thank you cards" He replied," two, and one of them was sent by you, Teri," I could not believe it! So in my own way, I am making up for the ones who do not take the time to say "Thank You!"
To date I have completed eight  Firefighting  Paintings.. I am honored that  my series hang in the Homeland  Security  Buildings  in New  York and Emmittsburg.

My Original "The Final Call" is an Exterior Memorial at Firefighters Park in South Florida, a free standing wall , measuring 6 feet tall and four and a half feet wide. Five of my paintings I have had silk screened on T-shirts, at the request of Firefighters. Prints of my Original Firefighter Art have been purchased for Awards, discounts on multiple orders are available. T shirts of my paintings can be personalized with Stations names, events and or special dates.  Also available, hand painted Portraits, photo needed.


My Rescuers, Danny and John 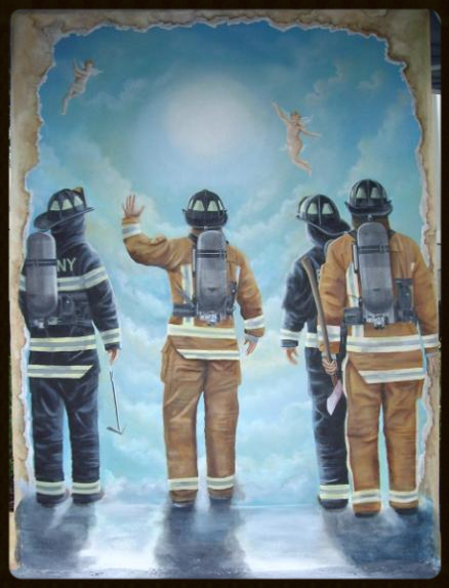 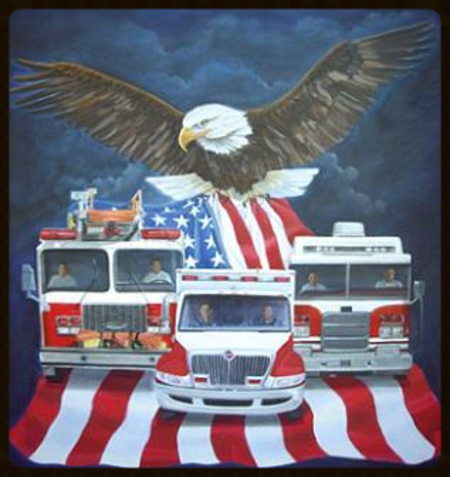 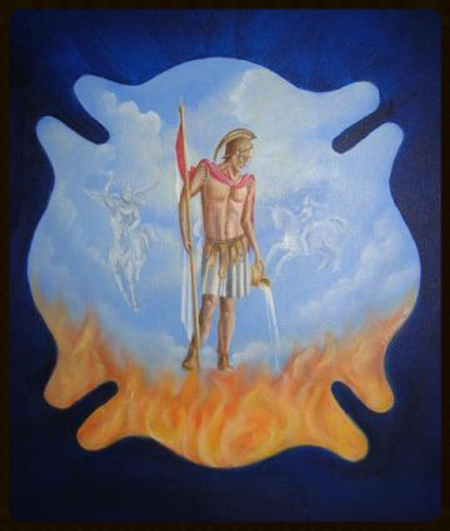 " Flying to the Rescue " 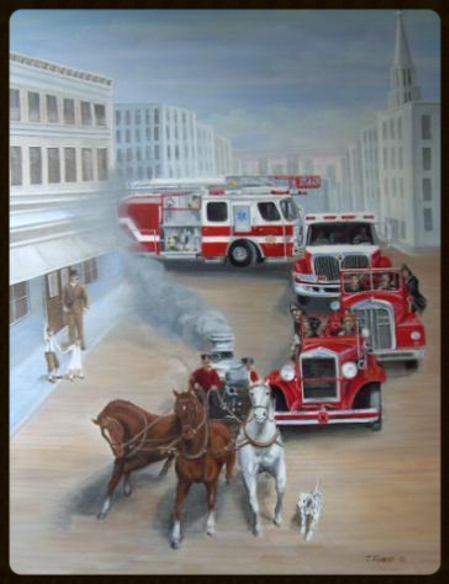 Mural for a Firefighters son 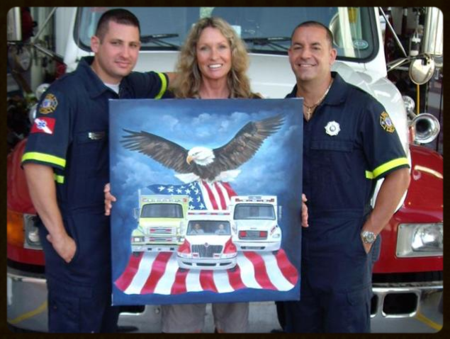 " To the Rescue Then and Now " 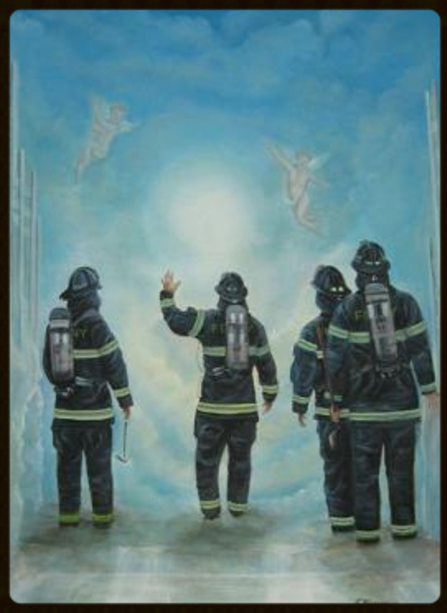 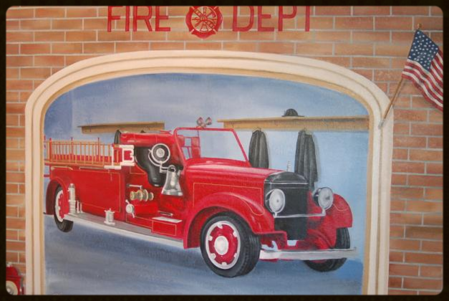 Memorial Portrait of Lt.Johns  donated to Station 13 in Fort Lauderdale

" The Final Call "  Exterior Mural  at the entrance to Firefighters Park in South Florida ..measures 6 foot by 4.5 feet.

EMS  EXPO Anniversary Painting. I collaborated with actor, Randolf Mantooth from the TV Show EMERGENCY  on this piece! 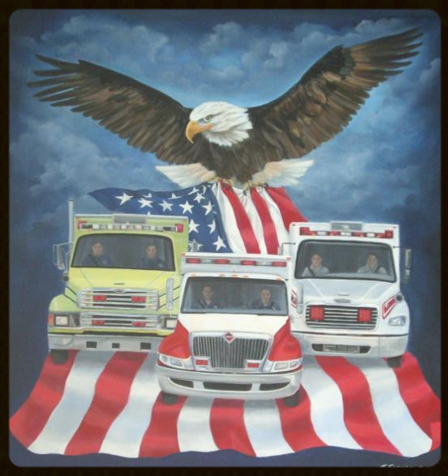 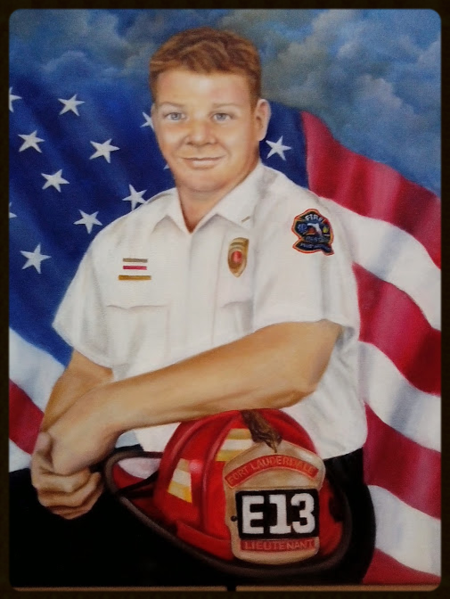 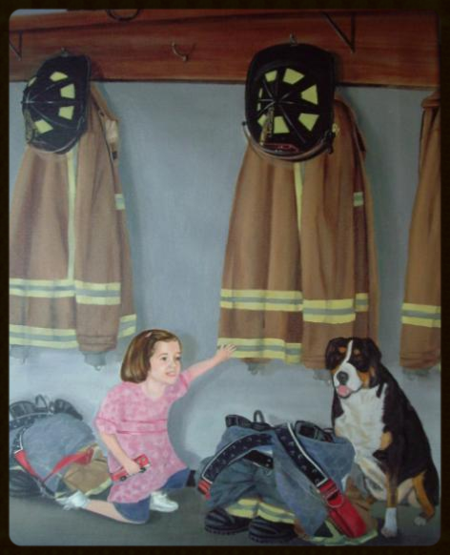 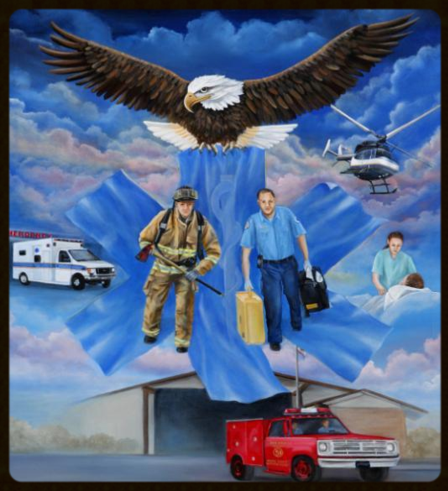